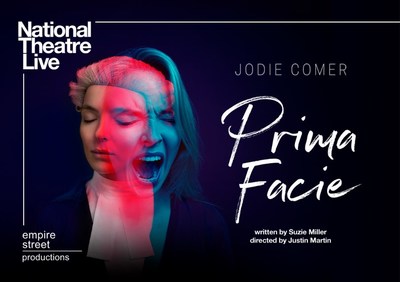 Tessa is a young, brilliant barrister. She has worked her way up from working class origins to be at the top of her game; defending; cross examining and winning. An unexpected event forces her to confront the lines where the patriarchal power of the law, burden of proof and morals diverge. Prima Facie takes us to the heart of where emotion and experience collide with the rules of the game.

"I am delighted that our production of Prima Facie will be available to watch in cinemas across the world. Alongside our ticketing initiatives this is another way that we can make sure that this play is accessible to anyone that would like to see it."

The production is designed by Miriam Buether, with lighting by Natasha Chivers, sound by Ben and Max Ringham, music composed by Rebecca Lucy Taylor and produced by James Bierman for Empire Street Productions.

This performance will be filmed live on stage in London's West End, at the Harold Pinter Theatre.

Sky Arts is the Headline Partner of National Theatre Live in the UK.

BALLYWALTER, a BFI, Screen Ireland and NIS supported feature film by Stacey Gregg and directed by Prasanna Puwanarajah is in post-production. THROUGH THE DUNES, a short film starring Ian Hart written & directed by Tim Price is in competition. Documentary THE REAL CHARLIE CHAPLIN, directed by Peter Middleton & James Spinney is on release. ESP are currently developing Television projects with Anonymous Content and Content Superba.

As Executive Producer at the Donmar Warehouse (2006-11), Bierman was involved in over 45 productions which won numerous awards including Tony, Drama Desk, Olivier, Evening Standard, Critics' Circle and South Bank Awards. As a producer at the Michael Grandage Company (MGC), which he founded with Grandage in 2011, he produced a hugely successful season of work at the Noel Coward Theatre, in London's West End: Privates on Parade starring Simon Russell Beale, A Midsummer Night's Dream starring Sheridan Smith and David Walliams, Peter and Alice starring Dame Judi Dench and Ben Whishaw, Henry V starring Jude Law, and The Cripple of Inishmaan starring Daniel Radcliffe. Following on from the success of this season, he produced Photograph 51 starring Nicole Kidman, and The Dazzle with Emily Dobbs, starring Andrew Scott. His first feature film, Genius, written by Academy Award Nominee John Logan and starring Colin Firth, Jude Law, Nicole Kidman and Laura Linney, premiered in competition at the Berlin Film Festival in 2016.

About the National Theatre

The National Theatre's mission is to make world-class theatre, for everyone.

The NT creates and shares unforgettable stories with audiences across the UK and around the world. On its own stages, on tour, in schools, on cinema screens and streaming at home, it strives to be accessible, inclusive, and sustainable.

The National Theatre empowers artists and craftspeople to make world-leading work, investing in talent and developing new productions with a wide range of theatre companies at its New Work Department.

Our nation thrives on fresh talent and new ideas, so the National Theatre works with young people and teachers right across the UK through performance, writing and technical programmes to ignite the creativity of the next generation.

Together with communities, the NT creates ambitious works of participatory theatre in deep partnerships that unite theatres and local organisations – showing that nothing brings us together like theatre.

Sky Arts exists to bring more art to more people across the UK. In 2020, with the creative industries under serious threat, we threw open our doors to make the channel free for everyone to watch. We've redoubled our mission to increase access to the arts and we're committed to getting everyone involved as the industry recovers. The fact is, we need the arts now like never before, and Sky Arts brings them straight to your living room.

We have something for everyone, championing creative talent by showcasing the best in music, theatre, dance, literature, opera and visual art. From Glyndebourne to Grime and Cézanne to The Style Council, we've got your passions covered. Millions of viewers tune in to hit returning series such as Portrait Artist of the Year, Urban Myths and British cultural institution The South Bank Show, but our acclaimed new programmes might take you anywhere from Pinter's house with Danny Dyer to a Scottish road trip with Samuel Johnson.

Collaboration is at the heart of what we do. Sky Arts is the headline sponsor of National Theatre Live in the UK and we work with cultural partners across the country including the

You can watch Sky Arts for free on Freeview channel 11 and Freesat channel 147. If you've got Sky or a Now TV entertainment pass, you can also watch over 2,000 hours of shows exclusively on demand.

Fathom is a recognized leader in the entertainment industry as one of the top distributors of content to movie theaters in North America. Owned by AMC Entertainment Inc. (NYSE: AMC); Cinemark Holdings, Inc. (NYSE: CNK); and Regal, a subsidiary of the Cineworld Group (LSE: CINE.L), Fathom operates the largest cinema distribution network, delivering a wide variety of programming and experiences to cinema audiences in all the top U.S. markets and to more than 45 countries.

BY Experience, pioneer of global live cinema events, presents the most in-demand arts events in cinemas. Since 2009, BY Experience helped launch and continues to distribute National Theatre Live to cinemas and other venues globally (excluding the UK and China). BY Experience is the Worldwide Distribution Representative of the Metropolitan Opera's award-winning and critically acclaimed Live in HD series (from 2005 to the present).