TARRYTOWN, N.Y. and WASHINGTON, May 13, 2022 -- Regeneron Pharmaceuticals, Inc. and Society for Science (the Society) announced that Robert Sansone, 17, of Fort Pierce, FL, won the $75,000 top award in the 2022 Regeneron International Science and Engineering Fair (Regeneron ISEF), the world's largest global high school competition, for a project that explored high-efficiency alternatives to induction motors. Other top prizes went to projects in the fields of energy storage, biomedical engineering and robotics. 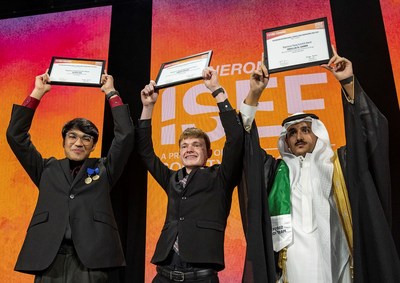 The top winners were honored during two hybrid award ceremonies, the first of which took place on the evening of May 12 and featured Special Award winners. The Grand Awards Ceremony was held on the morning of May 13 and featured the announcement of the top prize of $75,000. In total, awards valued at nearly U.S. $8 million were awarded to the finalists, who were evaluated based on their projects' creativity, innovation and level of scientific inquiry. The competition featured 1,750 young scientists representing 49 states and 63 countries, regions and territories across the world.

Robert Sansone won first place and received the $75,000 George D. Yancopoulos Innovator Award, named in honor of the pioneering drug discoverer and Regeneron co-founder, President and Chief Scientific Officer. Robert's research improved the torque (force) and efficiency of synchronous reluctance motors, which are rugged, efficient, magnet-free alternatives to traditional induction motors. He hopes his research will lead to sustainable manufacturing of electric vehicles that do not require magnets made from strategically important rare-earth elements.

Abdullah Al-Ghamdi, 17, of Dammam, Saudi Arabia, received one of two Regeneron Young Scientist Awards of $50,000 for modifying a metal-organic material so it could be used to both extract hydrogen from water and safely store it for clean energy production. Because the materials he added are relatively inexpensive, his work could significantly reduce the cost of hydrogen extraction and storage.

Rishab Jain, 17, of Portland, Oregon, received the second Regeneron Young Scientist Award of $50,000 for developing an AI-based model to enable rapid and cost-effective production of drugs, such as mRNA COVID-19 vaccines, using recombinant DNA technology. His model is trained to optimize the selection of genetic codes used to instruct the mRNA.

"Congratulations to the Regeneron International Science and Engineering Fair 2022 winners," said Maya Ajmera, President and CEO of Society for Science and Publisher of Science News. "Every single Regeneron ISEF finalist has shown true dedication, passion, and grit. Their commitment to their research, and perseverance throughout the continued challenges of COVID-19 are an inspiration to us all. We are eager to watch the impact they are sure to make in their communities and chosen fields."

Regeneron ISEF provides a global stage for the best and brightest young scientists and engineers around the world. Founded on the belief that advances in science are key to solving global challenges, Regeneron ISEF supports and invests in the next generation of leading STEM thinkers who are generating ideas and acting as catalysts for the change needed to improve the well-being of all people and the planet.

"These exceptionally talented Regeneron ISEF finalists are some of the brightest minds from around the world and our greatest hope for addressing global challenges in the future," said George D. Yancopoulos, M.D., Ph.D., co-founder, President and Chief Scientific Officer of Regeneron. "Science is critical to the survival of our society, and these finalists have limitless potential to make a positive impact on the world. I congratulate them for their hard work and am eager to see what they achieve in their scientific journeys."

For the first time since 2019, ISEF finalists competed in person. More than half of the finalists gathered in Atlanta, GA at the Georgia World Congress Center and the remaining finalists participated virtually.

Other top honors from the competition include:

Napassorn Litchiowong, 17; Chris Tidtijumreonpon, 16; and Wattanapong Uttayota, 17, of Mueang Chiang Mai, Thailand received the Gordon E. Moore Award of $50,000 for Positive Outcomes for Future Generations for their creation of a faster and more accurate way to diagnose a type of liver fluke infection that can lead to bile duct cancer in humans. The team built and trained neural network software to identify the parasite's eggs in microscopic fecal images with 98% accuracy and then developed a rapid screening questionnaire that was 91% accurate.

Amon Schumann, 17, of Berlin, Germany, received the Craig R. Barrett Award for Innovation of $10,000 for developing balloon-borne, light-weight solar-powered instruments that transmit aerial images, telemetry and climate data to a website he created. His device can stay aloft for several weeks circumnavigating the Earth at a consistent altitude and greatly reduces instrumentation costs.

Rebecca Cho, 17, of Jericho, New York, received the H. Robert Horvitz Prize for Fundamental Research of $10,000 for creating a geological model that incorporates the effects of changing landscapes, climate, sea level and erosion. Her model can be used to investigate ecological changes over 20 million years in the western U.S. and potentially predict the effects of climate change on the area's biodiversity.

Anika Puri, 17, of Chappaqua, New York, received the Peggy Scripps Award for Science Communication of $10,000 for her low-cost machine learning software that can analyze night-time infrared videos taken by a drone flown over the African wilderness to spot elephant poachers in real time. In tests, her $300 system worked with 91% accuracy, a fourfold improvement over current systems, without needing high-resolution thermal cameras that can cost up to $10,000.

More information about the top winners and visual assets can be found at https://www.societyforscience.org/isef-2022-media-kit/

For a full list of finalists who won awards, please visit HERE and HERE.

View all the finalists' research here.

About the Regeneron International Science and Engineering Fair
The Regeneron International Science and Engineering Fair (Regeneron ISEF), a program of Society for Science for over 70 years, is the world's largest global science competition for high school. Through a global network of local, regional and national science fairs, millions of students are encouraged to explore their passion for scientific inquiry. Each spring, a group of these students is selected as finalists and offered the opportunity to compete for approximately U.S. $8 million in awards and scholarships.

About Society for Science
Society for Science is dedicated to the achievement of young scientists in independent research and to public engagement in science. Established in 1921, the Society is a nonprofit whose vision is to promote the understanding and appreciation of science and the vital role it plays in human advancement. Through its world-class competitions, including the Regeneron Science Talent Search, the Regeneron International Science and Engineering Fair, the Broadcom MASTERS, and its award-winning magazine, Science News and Science News for Students, Society for Science is committed to inform, educate, and inspire. Learn more at www.societyforscience.org and follow us on Facebook, Twitter, Instagram and Snapchat (Society4Science).

About Regeneron
Regeneron (NASDAQ: REGN) is a leading biotechnology company that invents life-transforming medicines for people with serious diseases. Founded and led for nearly 35 years by physician-scientists, our unique ability to repeatedly and consistently translate science into medicine has led to nine FDA-approved treatments and numerous product candidates in development, almost all of which were homegrown in our laboratories. Our medicines and pipeline are designed to help patients with eye diseases, allergic and inflammatory diseases, cancer, cardiovascular and metabolic diseases, pain, hematologic conditions, infectious diseases and rare diseases.

Regeneron believes that operating as a good corporate citizen is crucial to delivering on our mission. We approach corporate responsibility with three goals in mind: to improve the lives of people with serious diseases, to foster a culture of integrity and excellence and to build sustainable communities. Regeneron is proud to be included on the Dow Jones Sustainability World Index and the Civic 50 list of the most "community-minded" companies in the United States. Throughout the year, Regeneron empowers and supports employees to give back through our volunteering, pro-bono and matching gift programs. Our most significant philanthropic commitments are in the area of science education, including the Regeneron Science Talent Search and Regeneron International Science and Engineering Fair.

Regeneron is a leading biotechnology company that invents life-transforming medicines for people with serious diseases. Founded and led for over 30 years by physician-scientists, its unique ability to repeatedly and consistently translate science into medicine has led to nine FDA-approved treatments and numerous product candidates in development, almost all of which were homegrown in its laboratories. Its medicines and pipeline are designed to help patients with eye diseases, allergic and inflammatory diseases, cancer, cardiovascular and metabolic diseases, pain, infectious diseases and rare diseases.