SODANKYLÄ, FINLAND / ACCESSWIRE / January 25, 2023 / FireFox Gold Corp. (TSXV:FFOX) (OTCQB:FFOXF) ("FireFox" or the "Company") is pleased to provide a summary of results from the 2022 exploration programs at its 100% held Jeesiö, Sarvi, Lehto and Kolho gold properties in Lapland, Finland (see Figure 1).

Trenching and bedrock sampling in the southern part of the huge Jeesiö Project returned anomalous gold over a large area, including 33.60 g/t Au from a bedrock grab sample at the Katajavaara Hill prospect. Nearly a kilometre away, FireFox geologists collected a rock chip channel sample at the Kataja South prospect that averaged 1.33 g/t Au over 0.8 metres. Another sample in the area contained 1.43 g/t Au, and numerous other samples in the area were highly anomalous in gold. These are the latest sampling results from the first excavations in the area, which was first identified by FireFox reconnaissance sampling late in 2019. The extent of gold mineralization at both prospects is not known, as the gold anomalies remain open along strike and at depth.

Bedrock mapping at the Sarvi property identified several new locations exhibiting strong alteration in metavolcanic and metasedimentary rocks, as well as mineralized chert with disseminate sulfide and gold values of 0.31 g/t in surface rock samples. The team noted similar geology farther north while mapping at the Company's Lehto Property. During the 2022 field campaign, geologists collected a grab sample at Lehto that contained 0.97 g/t gold. At the Kolho property, the field team completed preliminary reconnaissance bedrock mapping in preparation for the first round of mechanized base-of-till (BoT) sampling expected during the spring of 2023.

Carl Löfberg, FireFox CEO, commented about these results "At FireFox, we continue to advance several projects at various stages among our large portfolio of properties. We are always excited to see more than 10 g/t gold from early-stage exploration, and this is something we often observe on gold projects in Lapland. We have been heavily focused at Mustajärvi, but these results from Katajavaara, Sarvi, and Lehto warrant more work. We are confident the team will transform these strong early indications into viable drill targets by late this year."

In 2023, FireFox plans additional mapping and sampling at the Katajavaara prospects in order refine the targets for follow-up drilling. At Sarvi, the FireFox team will conduct more follow-up work from the 2022 BoT sampling to include mapping, sampling, ground geophysics, and core drilling. Initial exploration permits are expected before the end of the second quarter at Kolho, so the Company expects to continue with its target development at Lehto and Kolho and to add a BoT drill rig in that area during Q2. This work is in addition to the ongoing program at the Company's 100%-held Mustajärvi gold project, from which results for the first three holes of the Q4 2022 drilling campaign were recently reported, including 15.5m of 13.09 g/t gold (see Company news release dated January 18, 2023). The final results from that drill program are expected in February.

The 2022 trenching campaign was focused on the KJ South and KJ Hill prospects, which emerged from FireFox reconnaissance work in 2019 and 2020. The team excavated 9 small exploration trenches and collected 68 chip/channel and 34 grab samples from bedrock. In summary, approximately 68% of the total samples exceeded the detection limit for the method (0.005 g/t gold), and 15% of the samples contained anomalous levels of gold more than 0.100 g/t gold. Channel samples were taken perpendicular to observed mineralized veins and structures to represent true width. Most anomalous gold samples were hosted within quartz veins and lenses. The team recorded detailed information on the geology, alteration, veining, and structures from the trenches that will guide future work and drilling on these emerging targets. 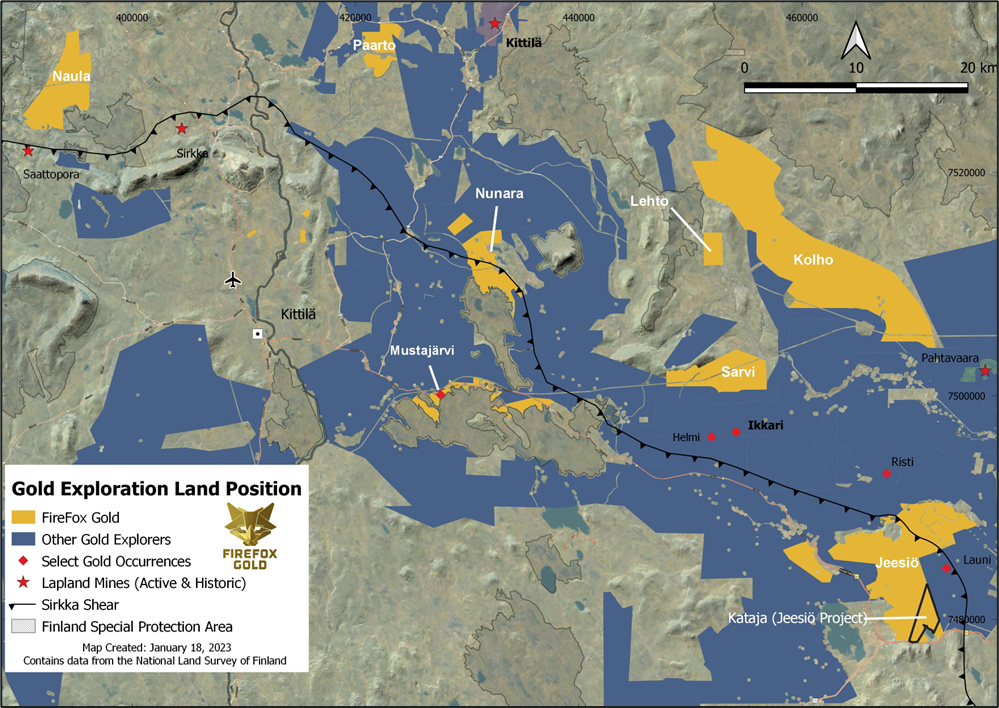 At KJ South, FireFox geologists identified high gold in the area (10.5 g/t Au) from quartz-magnetite-sulphide vein samples from outcrop in 2019 and 2020 (see Company news release dated October 6, 2020). These anomalous samples are associated with the southwest margin of a magnetic body believed to represent mafic intrusives or volcanic rocks. This outcrop area was the target of the 2022 exploration trenching campaign, the results of which are summarized in Figure 2 and Table 1. 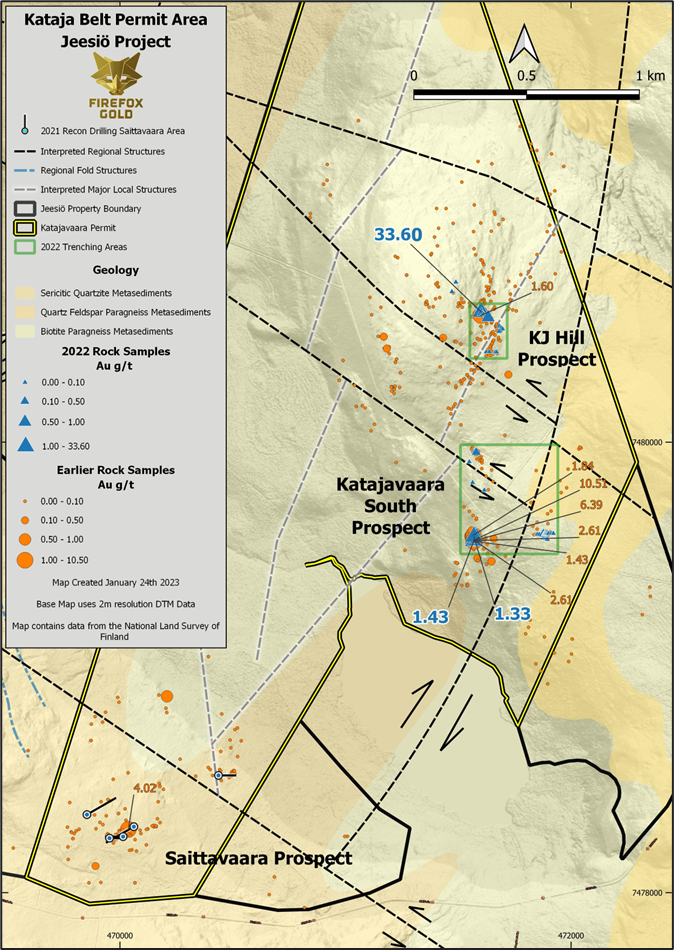 The trenches exposed the intensely sheared contact between siliciclastic metasedimentary and mafic intrusive rocks, revealing several mineralized quartz-sulphide veins and lenses within both units. In addition to pyrite and magnetite, geologists also noted the presence of chalcopyrite and copper oxides in these samples. The gabbro in the area is likely attributable to mafic sills that are related to a younger continental rift setting (Haaskalehto-type), which are common at the Jeesiö Project.

The mineralization encountered in the trenches is clearly controlled by shearing, as it crosscuts both lithologies and the contact between them. Among several samples in the area containing strongly anomalous gold, one chip channel sample averaged 1.33 g/t gold over 0.8 metres. Another grab sample contained 1.43 g/t gold. When considered in concert with the high gold values previously reported in the area (Figure 2), it is clear that this gold target is open and unconstrained in all directions and undrilled.

KJ Hill is located approximately 900 metres to the north of KJ South along the trend of a N-S oriented magnetic feature. Along the eastern slope of the hill, there are fields of locally derived boulders displaying abundant mineralized quartz veins intruding metasedimentary (arkose and quartzite) and mafic rocks. FireFox teams collected grab samples from boulders of these quartz veins in 2020, including one sample with 4.73 g/t Au (see Company news release dated October 6, 2020). This trend of anomalous samples is approximately 400 metres long and appears to be associated with a younger structure that crosscuts the north-trending magnetic anomaly in a northeasterly direction. This outcrop area was another focus of the 2022 exploration trenching campaign; and the geology and gold values are summarized in Figure 2 and Table 1.

At KJ Hill, the team cut three trenches that exposed several quartz lenses and veins hosted in siliciclastic metasedimentary rocks. The mineralization exposed in the trenches was relatively simple, quartz with chlorite and minor sulfides (partially oxidized). The highest-grade sample was 33.60 g/t Au from a bedrock grab sample of quartz vein. The extent of this system is not known, and it is undrilled.

FireFox had intended to continue the trenching at this prospect but the 2022 program was cut short due to weather. The majority of the Kataja Belt is on high ground and accessible year-round, so the team will return during 2023 for follow-up work.

FireFox also conducted limited reconnaissance bedrock mapping on its vast Kolho Property during the field season of 2022. Much of the Kolho area is situated within low-lying areas and swamps, where winter conditions are needed to conduct mechanized exploration. FireFox has several permit applications at Kolho and expects at least one expedited permit to be granted in the first half of 2023.

Reconnaissance bedrock mapping was also conducted on the Company's Sarvi and Lehto properties, which have valid permits in place. At Sarvi, Company geologists identified several locations of intensely carbonate-altered metavolcanics, massive carbonate units, and sulphide-bearing chert formations. These samples from the chert unit with disseminated sulphides contained anomalous gold, including one sample with 0.31 g/t. The FireFox team considers such intense alteration and polymetallic anomalies associated with mafic metavolcanics and major crosscutting structures (D2 and D3) as key elements for hosting an orogenic gold deposit at the Sarvi Project.

Similar sulphide-rich sedimentary and volcano-sedimentary rock units in close proximity to high-volume mafic volcanism are also often seen at the nearby Lehto Property. A limited sampling campaign at Lehto in 2022 also resulted in anomalous gold samples, including one sample containing 0.97 g/t Au.

Channel samples were sawed by a diamond saw in solid exposed bedrock and taken out by chisel and hammer. Geologists took the chip-channel samples with chisel and hammer from exposed bedrock, which was sometimes strongly weathered. Both types of channel samples were approximately 10 cm wide and taken perpendicular to observed mineralized veins and structures to represent true width. In some areas where continuous channel sampling was not possible, geologists collected grab samples. The grab samples discussed in this release are believed to be from in situ bedrock. FireFox geologists maintained chain of custody and sampling procedures according to best industry practice and with due attention to quality assurance and quality control, including sampling field duplicates and insertion of certified standard and blank samples.

FireFox team members transported the samples to an ALS sample prep lab in Sodankylä. The samples were then crushed to -2 mm, split and pulverized into 1kg pulps, before being shipped to the ALS facility in Rosia Montana, Romania for gold by fire assay of 50 gm aliquots with AAS finish (method Au-AA24).

ALS Laboratories is a leading international provider of assay and analytical data to the mining industry. All ALS geochemical hub laboratories, including the Irish facility, are accredited to ISO/IEC 17025:2017 for specific analytical procedures. The Firefox QA/QC program consists of insertion of certificated standard material and blanks inserted by Firefox into the analytical batches did not show deviations from recommended values.

Patrick Highsmith, Certified Professional Geologist (AIPG CPG # 11702) and director of the Company, is a qualified person as defined by National Instrument 43-101. Mr. Highsmith has helped prepare, reviewed, and approved, the technical information in this news release.

Dr. Sven Hönig, Certified European Geologist (EFG EurGeol Title # 1789) and General Manager of Exploration for the Company, is a qualified person as defined by National Instrument 43-101. Dr. Hönig has supervised the field work reported herein and has helped to prepare and approves, the technical information in this news release.

Finland is one of the top mining investment jurisdictions in the world as indicated by its multiple top-10 rankings in recent Fraser Institute Surveys of Mining Companies. Having a strong mining law and long mining tradition, Finland remains underexplored for gold. Recent exploration results in the country have highlighted its prospectivity, and FireFox is proud to have a Finland based CEO and technical team.

For more information, please refer to the Company's website and profile on the SEDAR website at www.sedar.com.

On behalf of the Board of Directors,

The information herein contains forward looking statements that are subject to a number of known and unknown risks, uncertainties and other factors that may cause actual results to differ materially from those anticipated in our forward-looking statements. Factors that could cause such differences include changes in world commodity markets, equity markets, the extent of work stoppage and economic impacts that may result from the COVID 19 virus, costs and supply of materials relevant to the mining industry, change in government and changes to regulations affecting the mining industry.

Forward-looking statements in this release may include statements regarding: the intent to conduct additional exploration and drilling; the likelihood of exploration permits being granted, the belief as to the location of the most prospective gold targets; the location of targets for future drill programs; and the current and future work program, including the extent and nature of exploration to be conducted in 2023. Although we believe the expectations reflected in our forward-looking statements are reasonable, results may vary.

The forward-looking statements contained herein represent the expectations of FireFox as of the date of dissemination and, accordingly, are subject to change after such date. Readers should not place undue importance on forward-looking statements and should not rely upon this information as of any other date. FireFox does not undertake to update this information at any particular time except as required in accordance with applicable laws.