The ship’s sponsors are the six women of the historic group known as the Little Rock Nine, the first African American students to attend all-white Central High School in Little Rock, Arkansas during desegregation. NNS honored all nine members, including the three men, during Saturday’s ceremony.

The Little Rock Nine made history in 1957 with their response to the Supreme Court ruling in Brown v. Board of Education, declaring racial segregation in public schools unconstitutional. Faced with shouting mobs, threats of violence and hostile state leaders who blocked their way, the teenagers were escorted into the school by federal troops at the direction of President Dwight D. Eisenhower. 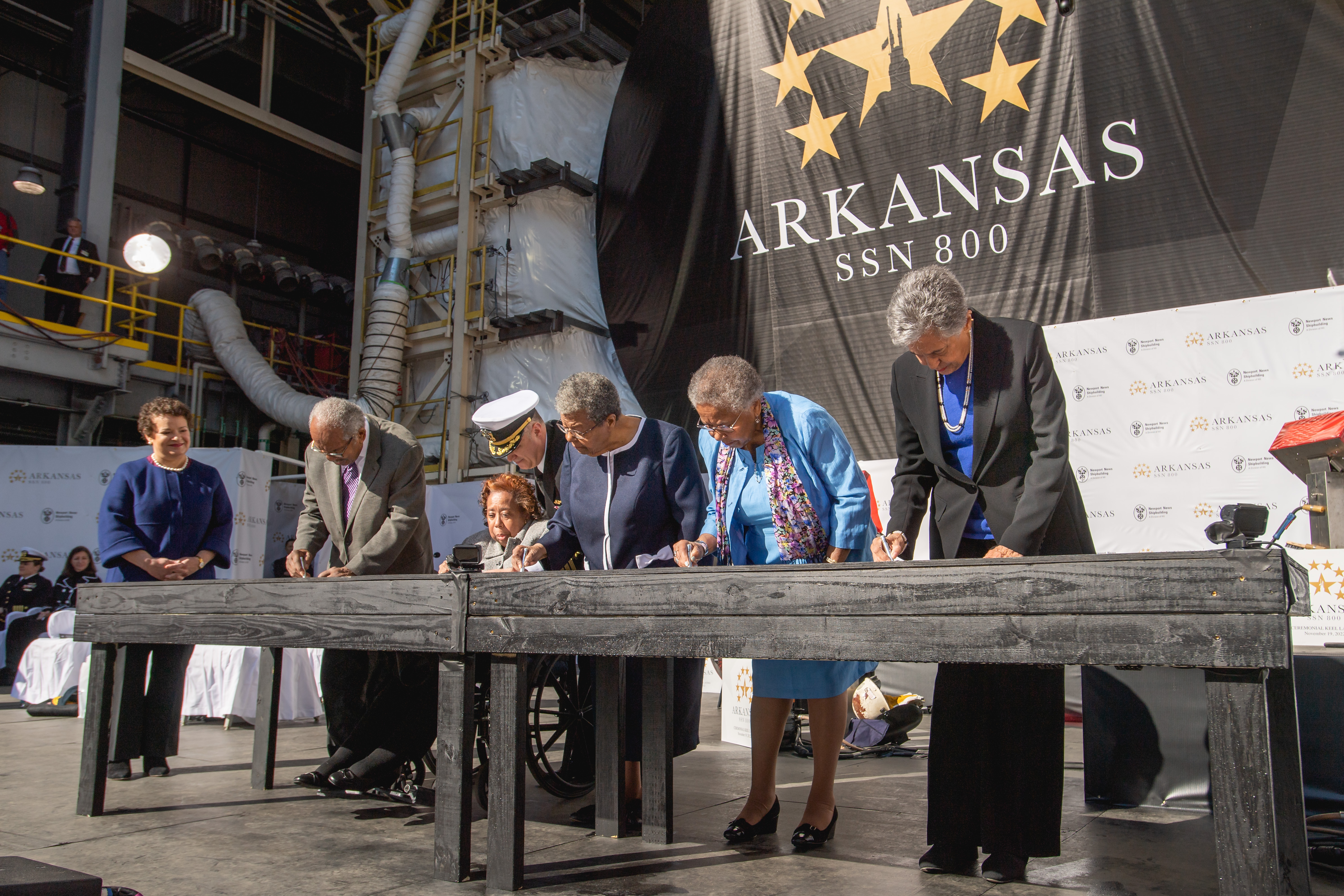 Photos accompanying this release are available at: https://hii.com/news/hii-virginia-class-attack-submarine-arkansas-ssn-800-keel.

“Their courageous spirit will forever inspire Arkansas and her crew. This group forever changed our nation’s history and their submarine will help ensure their legacy continues,” NNS President Jennifer Boykin said. “The bravery and resilience of the Little Rock Nine sparked a fire of change and demonstrated the strength of blending different perspectives and backgrounds. We harness this strength in the shipyard every day. Our diversity allows us to extend beyond our own limits, to reach new heights, and build each boat even better than the one before it. Arkansas will be proof of this power.”

During Saturday’s ceremony, NNS welders etched a historic six sets of initials of the Little Rock Nine onto metal plates, signifying the keel of SSN 800 as being “truly and fairly laid.” The metal plates will remain affixed to the submarine throughout its life.

“(Former Navy) Secretary Ray Mabus asked us to be supporters of the ship and its crew. I signed on to be a foster grandmother,” said Elizabeth Eckford, a member of the Little Rock Nine, who spoke on behalf of the group during the ceremony. “President Eisenhower sent 1,000 paratroopers to Little Rock to disperse a mob, bring order, and they made it possible for us to enter Central High School. From that point, I’ve had very high regard for specially trained forces.”

Arkansas is the 27th Virginia-class fast attack submarine being built under the teaming agreement with General Dynamics Electric Boat.

“With advances in sound silencing, acoustic sensors, and weapons delivery systems, Arkansas will traverse the world’s oceans and seas as an apex predator. Representing our asymmetric advantage in the undersea domain, the Arkansas will have no equal,” said Vice Adm. William Houston, commander, Naval Submarine Forces.

“It is an incredible honor for the crew to begin to establish the relationship with our namesake state of Arkansas as well as with the ship's sponsors,” said Cmdr. Adam Kahnke, commanding officer of the pre-commissioning unit. “The story of the Little Rock Nine demonstrates the power of perseverance in the face of adversity. I find the relationship with the ship’s sponsors very appropriate due to the fact that perseverance is an essential attribute to success in the art of submarine warfare.”

NNS is one of only two shipyards capable of designing and building nuclear-powered submarines. The advanced capabilities of Virginia-class submarines increase firepower, maneuverability and stealth.

This milestone on Arkansas comes following the delivery of USS Montana (SSN 794), the launch of New Jersey (SSN 796), and continued progress on Massachusetts (SSN 798) at NNS earlier in 2022, as the shipyard continues to invest in its workforce and facilities to make steady progress on delivering these important assets to the Navy.

HII is a global, all-domain defense partner, building and delivering the world’s most powerful, survivable naval ships and technologies that safeguard our seas, sky, land, space and cyber.

As America’s largest shipbuilder and with a more than 135-year history of advancing U.S. national defense, we are united by our mission in service of the heroes who protect our freedom. HII’s diverse workforce includes skilled tradespeople; artificial intelligence, machine learning (AI/ML) experts; engineers; technologists; scientists; logistics experts; and business professionals. Headquartered in Virginia, HII’s workforce is 43,000 strong. For more information, visit: