CALGARY, AB / ACCESSWIRE / March 9, 2022 / CANEX Metals Inc. (TSXV:CANX)(OTC PINK:NOMNF)(FRA:NJM1) ("CANEX" or the "Company") is pleased to announce exploration results for 670 soil samples and 42 rock samples from the Gold Range Project, Arizona. These surface sampling results combined with geologic mapping have added new exploration targets and increased our understanding of, and confidence in, the 3-kilometre-long oxide gold exploration target at Eldorado-Malco-Excelsior.

Assay results for 670 soil samples and 42 rock samples are presented in this release. Rock samples include a mix of chip and grab samples with grades ranging from below detection to 66.6 g/t gold, with an average from all 42 samples of 2.8 g/t gold. Assay results for a further 169 rock samples are pending. Soil anomalies and rock sample locations are shown on the map below. Of note is the large gold in soil anomaly extending from Eldorado to the southwest through Malco and to Excelsior in the northeast, a strike length of 3.2 kilometres.

Surface sampling at the Malco Zone has defined a gold in soil anomaly up to 750 metres long by up to 350 metres wide within the central part of the larger Excelsior-Malco-Eldorado trend. Previous sampling has identified multiple high-grade gold veins within this zone, and recent surface work identified two more veins which returned 29.6 g/t and 5.44 g/t gold in grab samples. Malco contains multiple historic underground workings along a 500 metre strike length. The drill is currently focused on drill testing Malco over 300 metres of strike length.

Sampling at the Lillian Zone has expanded the Central Zone gold in soil anomaly to the northwest connecting it to Lillian. This combined Central-Lillian soil anomaly now covers an area 1100 metres long by up to 200 metres wide. New rock sampling within this anomaly have identified a mineralized outcrop which returned 1.15 g/t gold in a grab sample. Multiple old workings and prospect pits occur through the Central-Lillian soil anomaly and 2 recent drill holes have tested the zone, with results pending.

Highlights of Gold Range Rock Samples in this release.

*All grab and chip samples reported here were taken by CANEX personnel with all chip samples taken perpendicular to the strike of the structures sampled. Grab samples are selective in nature and are not necessarily representative of mineralization on the property.

Dr. Shane Ebert. President of the Company stated, "We are very pleased to see our surface exploration efforts increasing the size of our exploration targets and giving us multiple new target areas for drill testing. Surface mapping and sampling have identified additional zones of mineralized quartz stockwork veining that run parallel to the known Excelsior zone on the east side. The identification of multiple subparallel mineralized zones within the Excelsior soil anomaly certainly increase the near surface tonnage potential of the zone." 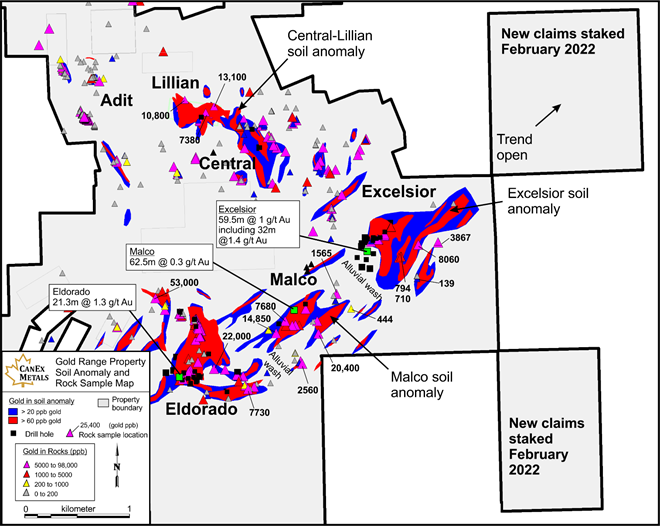 The drill has completed 12 step out holes around GR21-57 located on the southern end of the Excelsior zone and which recently intersected 1.0 g/t gold over 59.45 metres starting from surface (previously released, see December 16, 2021 news release). There is now sufficient drilling in this zone to determine if mineralization continues and widens to the south.

Two holes have recently been completed on new exploration targets, one testing a large gold in soil anomaly in the Central Zone and one testing multiple mineralized zone exposed at the historic Lillian Mine. The drill is currently focused on testing the Malco Zone in 4 deep holes testing about 300 metres of strike length.

For the current program results for 12 holes have been received and released, an additional 34 holes are in the process of being analyzed and will be released in batches as they are complete.

Soil and rock samples were taken by Company personnel and analysed by Skyline Assayers and Laboratories in Tucson, Arizona (which is ISO/IEC 17025 accredited). Soil samples were screened to minus 80 mesh and analysed for gold by fire assay with an atomic absorption finish (method FA-01). The 670 soil samples reported here had gold results ranging from <5 parts per billion (ppb) to 2029 ppb, averaging 40 ppb.

Rock samples were prepared using a 1000g pulp and assayed by a 50g fire assay with an atomic absorption finish (method FA-01-50g). Standards and blanks were included with select surface sample batches.

CANEX Metals (TSX.V:CANX) is a Canadian junior exploration company focused on advancing its Gold Range Project in Northern Arizona. CANEX is led by an experienced management team, which has made three notable porphyry and bulk tonnage discoveries in North America, and is sponsored by Altius Minerals (TSX: ALS) the Company's largest shareholder. CANEX has identified several bulk tonnage oxide gold targets at its Gold Range Project. Recent drilling has identified near surface bulk tonnage gold zones along a 3 km long highly prospective trend that has seen limited modern exploration. The Company's current focus is on step out drilling along strike and to depth to demonstrate the scale of the project.

Dr. Shane Ebert P.Geo., is the Qualified Person for CANEX Metals and has approved the technical disclosure contained in this news release.

Except for the historical and present factual information contained herein, the matters set forth in this news release, including words such as "expects", "projects", "plans", "anticipates" and similar expressions, are forward-looking information that represents management of CANEX Metals Inc. internal projections, expectations or beliefs concerning, among other things, future operating results and various components thereof or the economic performance of CANEX. The projections, estimates and beliefs contained in such forward-looking statements necessarily involve known and unknown risks and uncertainties, which may cause CANEX's actual performance and financial results in future periods to differ materially from any projections of future performance or results expressed or implied by such forward-looking statements. These risks and uncertainties include, among other things, those described in CANEX's filings with the Canadian securities authorities. Accordingly, holders of CANEX shares and potential investors are cautioned that events or circumstances could cause results to differ materially from those predicted. CANEX disclaims any responsibility to update these forward-looking statements.