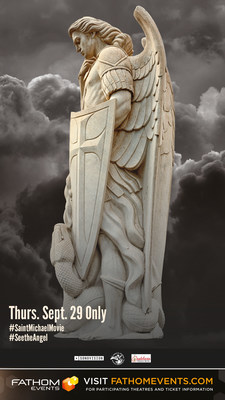 This is the first documentary of its kind on Saint Michael to release in theaters. It will lead the audience to the places of apparitions of Saint Michael the Archangel and will include powerful testimonies of faith, riveting Church history, and beautiful architecture and art in Christian culture that will bring people closer to the extraordinary figure of Archangel Michael.

Tickets for SAINT MICHAEL: MEET THE ANGEL can be purchased at www.FathomEvents.com or at participating theater box offices. Fans throughout the U.S. will be able to enjoy the event in select movie theaters; for a complete list of theater locations visit the Fathom Events website (theaters and participants are subject to change).

Who is Archangel Michael? What is his role in the life of Church history to today? Why do we need angels? These are some of the questions that will be answered and bring inspiration to audiences of all ages.

"SAINT MICHAEL: MEET THE ANGEL will present audiences with an opportunity to really get to know the very first among the pure spirits known as angels - Saint Michael. This look into his life is based on Scripture, history and Church teaching," said Konrad Sosnowski, CEO of Sonovision. "The documentary focuses on the history of the person and the veneration of the Commander of the Hosts of Heaven, Saint Michael the Archangel."

SAINT MICHAEL arrives as part of a new offering by Fathom Events called The Saint Series, a special collection of films in which moviegovers can learn the fascinating stories behind everyday people who became Catholic saints.

After the SAINT MICHAEL documentary film plays, audiences are encouraged to remain in their seats as the filmmakers have produced a bonus feature that includes commentary from several leaders and experts who will expound upon the efficacy of Archangel Michael and the meaning of angels and holy helpers in general. This bonus feature adds to the rich documentary content that will expose viewers to the divine mystery of the angelic. Some of the notable leaders to appear in the bonus feature include: Fr. Donald Calloway, MIC, author of Consecration to Saint Joseph: The Wonders of Our Spiritual Father; Fr. Chris Alar, MIC, Provincial Superior of the Blessed Virgin Mary, Mother of Mercy Province of the Marian Fathers of the Immaculate Conception; Fr. Robert Altier; and Fr. Wolgang Seitz, ORC, of the Order of Canons Regular of the Holy Cross and Secretary of Opus Sanctorum Angelorum.

"In a world of increasing darkness and chaos, God has set up for us a supernatural force to help us combat this evil," said Fr. Wolfgang Seitz of Opus Angelum, an order dedicated to studying and propagating the work of the Holy Angels. "SAINT MICHAEL: MEET THE ANGEL introduces us to the Holy Angels especially Saint Michael which explains his importance through scripture and Church teaching. You need to call upon the angels as they are your first line of defense."

Fathom Events is a recognized leader in the entertainment industry as one of the top distributors of content to movie theaters in North America. Owned by AMC Entertainment Inc. (NYSE: AMC); Cinemark Holdings, Inc. (NYSE: CNK); and Regal, a subsidiary of the Cineworld Group (LSE: CINE.L), Fathom operates the largest cinema distribution network, delivering a wide variety of programming and experiences to cinema audiences in all the top U.S. markets and to more than 45 countries. For more information, visit FathomEvents.com.

Sonovision is an American founded sales and distribution company based in Warsaw Poland, with offices in Los Angeles, California and Vienna, Austria. Thanks to a history of forty years in the film industry, with its first distribution company, DMS - Distribution & Media Services, being started in Los Angeles, California in the late 80's, it has very strong relationships and experienced partners worldwide. In the USA and Poland Sonovision is a theatrical distributor, and represents numerous films as a sales agent worldwide. It has cooperated with companies like Miramax, Netflix, and Discovery. Sonovision is present at all the major Film Festivals and Markets, and is always open to new partnerships and ventures.