90-day survival was 74% overall, with early intervention with ECMO and CytoSorb associated with improved survival, and shorter duration on ECMO, mechanical ventilation, and ICU stay compared to late intervention

PRINCETON, N.J., Nov. 2, 2022 -- CytoSorbents Corporation (NASDAQ: CTSO), a leader in the treatment of life-threatening conditions in the intensive care unit and cardiac surgery using its CytoSorb® blood purification technology, announced the presentation of the final key results from the U.S. multicenter CytoSorb Therapy in COVID-19 (CTC) Registry at the 35th Annual Congress of the European Society of Intensive Care Medicine (ESICM) in Paris last week.  CytoSorb was granted U.S. FDA Emergency Use Authorization (EUA) in April 2020 for use in adult, critically ill COVID-19 patients with imminent or confirmed respiratory failure to reduce cytokines and other inflammatory toxins that can cause hyperinflammation.  Severe hyperinflammation is strongly correlated with more severe COVID-19 illness, need for mechanical ventilation, and risk of death. 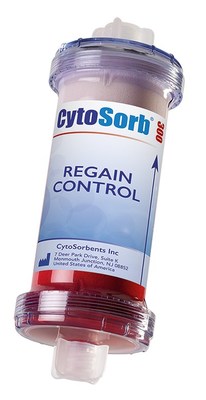 The CTC registry captured outcomes data on 100 critically ill hyper-inflamed COVID-19 patients with severe acute respiratory distress syndrome (ARDS) and refractory respiratory failure who were treated with an "Enhanced Lung Rest" strategy using CytoSorb and extracorporeal membrane oxygenation (ECMO) at five major U.S. ECMO centers.  ECMO helps to rest the lungs and avoid ventilator-induced lung injury (VILI) by pumping blood and conducting gas exchange outside of the body, and reducing or eliminating the need for mechanical ventilation.  CytoSorb® is easily installed into the ECMO circuit and actively removes a broad range of cytokines and other inflammatory toxins from the bloodstream that can cause blood vessel injury and capillary leak syndrome – a key pathology in ARDS that results in pulmonary edema, severely compromised gas exchange, and unrelenting damage to the lungs.  The goal of this "Enhanced Lung Rest" strategy is to allow the lungs to rest and heal, which we believe is the key to reversing ARDS, getting patients off of ECMO and mechanical ventilation, and ultimately to survive.

Dr. J.W. Awori Hayanga, MD, MPH, FACS, FRCS, FCCP, Professor in Cardiovascular & Thoracic Surgery and Director of the ECMO program at West Virginia University School of Medicine, led a team of investigators from 5 U.S. academic institutions to implement the strategy of "enhanced lung rest" in this population.  Dr. Hayanga commented, "We are pleased with the very favorable survival rates that we observed in the CTC Registry among the sickest possible COVID-19 patients that are on life support with ECMO.  These results suggest that hyperinflammation plays a critical role in the severity of respiratory failure in patients with ARDS and support the strategy of integrating CytoSorb with ECMO to simultaneously rest and heal the lungs. This multicenter dataset is very exciting and sets the stage for further investigation into this novel approach to treat severe ARDS."

Dr. Joerg Scheier, Vice President, Medical Affairs - Critical Care at CytoSorbents commented, "These compelling results support the concept of improved lung protection and recovery with CytoSorb in combination with veno-venous ECMO treatment.  We see from the data that, very similar to other CytoSorb application fields, early initiation of CytoSorb therapy seems to be a key to positive treatment outcomes.  Overall, these very positive results on ECMO-integrated CytoSorb therapy support the further evaluation of the promising and safe approach of "enhanced lung rest" by the combination of ECMO and CytoSorb in the treatment of ARDS."

Dr. Phillip Chan, Chief Executive Officer of CytoSorbents stated, "This is the largest multicenter case series using CytoSorb with ECMO in critically ill COVID-19 patients in the world to date.  It highlights that when CytoSorb is used in the right patients, at the right time, with the right dose, the outcomes are excellent and reproducible among different centers.  Specifically, we targeted early intervention with CytoSorb and ECMO in COVID-19 patients with hyperinflammation who developed refractory respiratory failure and severe ARDS and rapidly failed mechanical ventilation, and who did not yet have fulminant thromboembolic disease as measured by D-dimers.  These criteria were based upon knowledge gained from the CytoSorb-ECMO user community around the world during the rapidly evolving pandemic, most of whom have had years of experience integrating the two therapies together to treat non-COVID ARDS, our own insights, and those from our former Chief Medical Officer and pioneer of ECMO, Dr. Robert Bartlett.  We are grateful to have had the opportunity to positively impact the lives of critically ill COVID patients here in the U.S. under FDA EUA and those around the world and look forward to advancing this concept of "enhanced lung rest" for the primary treatment of moderate to severe ARDS in the future."

About CytoSorb FDA Emergency Use Authorization

In April 2020, the United States Food and Drug Administration (FDA) granted Emergency Use Authorization (EUA) to CytoSorb® for use in patients with COVID-19 infection.  The EUA allows CytoSorb to be commercially sold to, and used in, all hospitals in the United States for use in patients, 18 years of age or older, with confirmed COVID-19 infection who are admitted to the intensive care unit (ICU) with confirmed or imminent respiratory failure who have either severe disease, early acute lung injury or acute respiratory distress syndrome (ARDS), or life-threatening illness resulting in respiratory failure, septic shock, and/or multiple organ dysfunction or failure.  As with all EUA therapies, the CytoSorb device has neither been cleared nor approved for the indication to treat patients with COVID-19 Infection.  The EUA will be effective until the declaration, that circumstances exist justifying the authorization of the emergency use of the CytoSorb device during the COVID-19 pandemic, is terminated under section 564(B)(2) of the Act, or the EUA is revoked under section 564(g) of the Act.

CytoSorbents Corporation is a leader in the treatment of life-threatening conditions in the intensive care unit and in cardiac surgery through blood purification.  Its lead product, CytoSorb®, is approved in the European Union and distributed in 75 countries worldwide. It is an extracorporeal cytokine adsorber that reduces "cytokine storm" or "cytokine release syndrome" in common critical illnesses that can lead to massive inflammation, organ failure and patient death.  In these diseases, the risk of death can be extremely high, and there are few, if any, effective treatments.  CytoSorb is also used during and after cardiothoracic surgery to remove inflammatory mediators that can lead to postoperative complications, including multiple organ failure.  As of June 30, 2022, more than 179,000 CytoSorb devices have been used cumulatively.  CytoSorb was originally launched in the European Union under CE mark as the first cytokine adsorber.  Additional CE mark extensions were granted for bilirubin and myoglobin removal in clinical conditions such as liver disease and trauma, respectively, and for ticagrelor and rivaroxaban removal in cardiothoracic surgery procedures.  CytoSorb has also received FDA Emergency Use Authorization in the United States for use in adult critically ill COVID-19 patients with impending or confirmed respiratory failure.  The DrugSorb™-ATR antithrombotic removal system, based on the same polymer technology as CytoSorb, also received two FDA Breakthrough Device Designations, one for the removal of ticagrelor and another for the removal of the direct oral anticoagulants (DOAC) apixaban and rivaroxaban in a cardiopulmonary bypass circuit during urgent cardiothoracic procedures.  The company has initiated two FDA-approved pivotal studies to support FDA marketing approval of DrugSorb-ATR in the United States.  The first is the randomized, controlled STAR-T (Safe and Timely Antithrombotic Removal-Ticagrelor) study of 120 patients at 30 centers to evaluate whether intraoperative use of DrugSorb-ATR can reduce the perioperative risk of bleeding in patients receiving ticagrelor and undergoing cardiothoracic surgery.  The second study is the STAR‑D (Safe and Timely Antithrombotic Removal-Direct Oral Anticoagulants) randomized, controlled trial of 120 patients at 30 centers evaluating the intraoperative use of DrugSorb-ATR to reduce perioperative bleeding risk in patients undergoing cardiothoracic surgery and taking direct oral anticoagulants, including apixaban and rivaroxaban.

CytoSorbents' purification technologies are based on biocompatible, highly porous polymer beads that can actively remove toxic substances from blood and other bodily fluids by pore capture and surface adsorption.  Its technologies have received non-dilutive grant, contract, and other funding of approximately $48 million from DARPA, the U.S. Department of Health and Human Services (HHS), the National Institutes of Health (NIH), National Heart, Lung, and Blood Institute (NHLBI), the U.S. Army, the U.S. Air Force, U.S. Special Operations Command (SOCOM), Air Force Material Command (USAF/AFMC), and others.  The Company has numerous marketed products and products under development based upon this unique blood purification technology protected by many issued U.S. and international patents and registered trademarks, and multiple patent applications pending, including ECOS-300CY®, CytoSorb-XL™, HemoDefend-RBC™, HemoDefend-BGA™, VetResQ®, K+ontrol™, DrugSorb™, DrugSorb™-ATR, ContrastSorb, and others.  For more information, please visit the Company's websites at www.cytosorbents.com and www.cytosorb.com or follow us on Facebook and Twitter.

CytoSorbents Corporation is a leader in critical care immunotherapy, specializing in blood purification. Its flagship product, CytoSorb® is approved in the European Union with distribution in 66 countries around the world, as an extracorporeal cytokine adsorber designed to reduce the “cytokine storm” or “cytokine release syndrome” that could otherwise cause massive inflammation, organ failure and death in common critical illnesses. These are conditions where the risk of death is extremely high, yet no effective treatments exist. CytoSorb® is also being used during and after cardiac surgery to remove inflammatory mediators that can lead to post-operative complications, including multiple organ failure. CytoSorb® has been used in more than 110,000 human treatments to date. CytoSorb has received CE-Mark label expansions for the removal of bilirubin (liver disease), myoglobin (trauma) and both ticagrelor and rivaroxaban during cardiothoracic surgery. CytoSorb has also received FDA Emergency Use Authorization in the United States for use in critically ill COVID-19 patients with imminent or confirmed respiratory failure, in defined circumstances. CytoSorb has also been granted FDA Breakthrough Designation for the removal of ticagrelor in a cardiopulmonary bypass circuit during emergent and urgent cardiothoracic surgery. CytoSorbents’ purification technologies are based on biocompatible, highly porous polymer beads that can actively remove toxic substances from blood and other bodily fluids by pore capture and surface adsorption. Its technologies have received non-dilutive grant, contract, and other funding of more than $38 million from DARPA, the U.S. Department of Health and Human Services (HHS), the National Institutes of Health (NIH), National Heart, Lung, and Blood Institute (NHLBI), the U.S. Army, the U.S. Air Force, U.S. Special Operations Command (SOCOM), Air Force Material Command (USAF/AFMC), and others. The Company has numerous products under development based upon this unique blood purification technology protected by many issued U.S. and international patents and multiple applications pending, including ECOS-300CY™, CytoSorb-XL™, HemoDefend-RBC™, HemoDefend-BGA™, VetResQ™, K+ontrol™, ContrastSorb, DrugSorb, and others.