CALGARY, AB / ACCESSWIRE / September 6, 2022 / CANEX Metals Inc. ("CANEX" or the "Company") is pleased to announce the results from 11 reverse circulation drill holes from the Gold Range Project located in northern Arizona and the receipt of an amended exploration permit for the project.

Assay results for drill holes GR22-86 to 96, from the Excelsior, Central, Lillian, and Malco zones, have been received and are presented here. A drill hole location map is shown on Figure 1, and a SW-NE cross section through the Central Zone discovery is shown on Figure 2. Significant gold intersections are shown in the table below, with 9 of the 11 holes encountering significant gold mineralization (holes GR22-89 and GR22-94 did not encounter significant mineralization).

A single hole, GR22-91, was drilled at the Central Zone during the January to March 2022 drilling program resulting in a new drill discovery. Hole GR22-91 intersected 2 mineralized intervals returning 0.7 g/t gold over 9.15 metres from 15.24 metres depth and 0.6 g/t gold over 18.29 metres from 47.26 metres depth including 1.1 g/t gold over 7.62 metres. Hole GR22-91 intersected a cumulative mineralized interval of 27.44 metres grading 0.6 g/t gold and demonstrates the potential for Central to host significant zones of gold mineralization. Hole GR22-92 was drilled 490 metres to the northwest and also intersected mineralization returning 1.0 g/t gold over 4.57 metres. Follow up drilling has been conducted at the Central Zone as part of the current drill program. 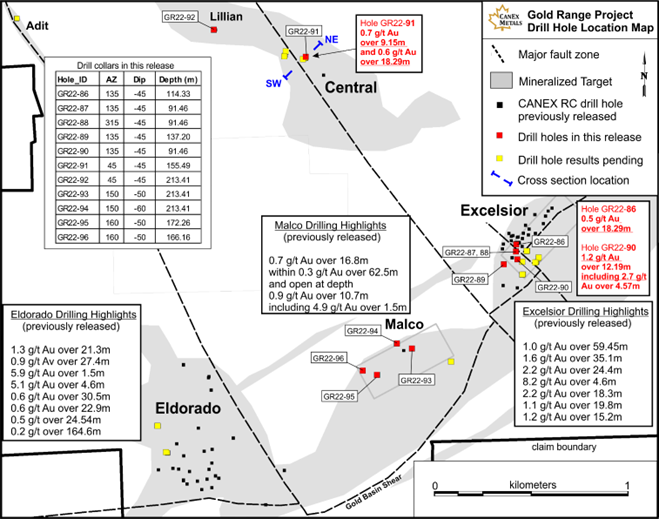 Dr. Shane Ebert, President of the Company stated, "We are very pleased to have identified bulk tonnage gold potential in drilling at the Central Zone. The drill discovery remains open in all directions and will see substantial expansion drilling as the project advances. The large size of the Central Zone gold in soil and alteration footprint suggests a sizable exploration target in this area, second only to the larger Excelsior to Eldorado trend to the south.

Drilling at Excelsior continues to return strong grades, locally exceeding 1 g/t gold, and we are happy to see the zone expanding with each successive drill program." 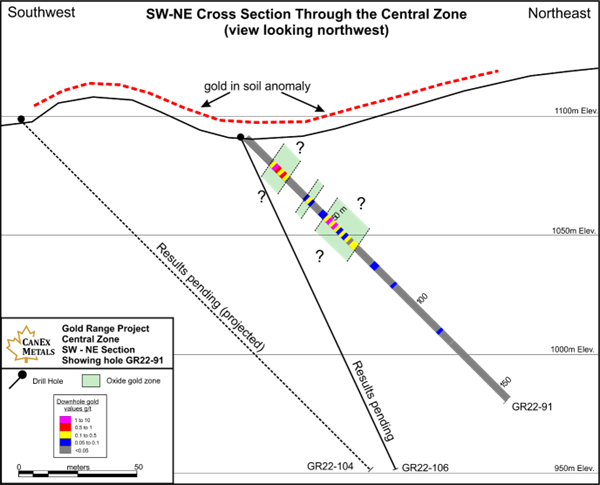 The Company is very pleased to announce the receipt of an amended exploration permit for Gold Range allowing the Company to construct an additional 40 drill pads on federal lands along with associated exploration access.

During the current reverse circulation drill program which commenced in May, a total of 18 holes have been completed for 3027 metres of drilling. This brings the total number of holes by CANEX at Gold Range to 144, for a total of 12,249 metres of drilling. Drilling was recently paused pending permitting and now that the exploration permit has been received planning is underway to resume the drilling program.

A short video on the Gold Range project featuring a brief overview of the property, the main zones being explored, and photos of historic open pit and underground workings and gold observed from those workings is available here Gold Range Video.

Reverse circulation drill cuttings were collected in numbered cloth sample bags from 5 foot (1.52m) intervals during drilling and were picked up from site and analyzed by Skyline Assayers and Laboratories in Tucson, Arizona (which is ISO/IEC 17025 accredited). A 1000g pulp was prepared and gold was assayed using a 50g fire assay with an atomic absorption finish (method FA-01-50g). Gold samples greater than 5 g/t are redone using a 50g fire assay method with a gravimetric finish (method FA-02 50g). The Company included certified reference standards, blanks, and duplicates in every sample batch and then checked to ensure proper quality assurance and quality control prior to releasing the data.

The Gold Range project is a new bulk-tonnage oxide-gold target located within an underexplored metamorphic terrain in Northern Arizona. CANEX controls 5 kilometres of strike length along a highly prospective district scale structure where mineralization is being defined through surface sampling, mapping, and reverse circulation drilling. The main exploration target defined by surface work is 3200 metres long by up to 500 metres wide with multiple subparallel exploration targets identified. The target zone remains open along strike under basin cover. Drilling by CANEX has returned strong results including 1 g/t gold over 59.5 metres, 1.6 g/t gold over 35.1 metres, 2.2 g/t gold over 24.4 metres, and 0.3 g/t gold over 62.5 metres.

CANEX Metals (TSX.V:CANX) is a Canadian junior exploration company with a new gold discovery at the Gold Range Project in Northern Arizona, and high grade silver and gold mineralization at the Gibson property in British Columbia. CANEX is led by an experienced management team which has made three notable porphyry and bulk tonnage discoveries in North America and is sponsored by Altius Minerals (TSX: ALS) the Company's largest shareholder.

Dr. Shane Ebert P.Geo., is the Qualified Person for CANEX Metals and has approved the technical disclosure contained in this news release.

Except for the historical and present factual information contained herein, the matters set forth in this news release, including words such as "expects", "projects", "plans", "anticipates" and similar expressions, are forward-looking information that represents management of CANEX Metals Inc. internal projections, expectations or beliefs concerning, among other things, future operating results and various components thereof or the economic performance of CANEX. The projections, estimates and beliefs contained in such forward-looking statements necessarily involve known and unknown risks and uncertainties, which may cause CANEX's actual performance and financial results in future periods to differ materially from any projections of future performance or results expressed or implied by such forward-looking statements. These risks and uncertainties include, among other things, those described in CANEX's filings with the Canadian securities authorities. Accordingly, holders of CANEX shares and potential investors are cautioned that events or circumstances could cause results to differ materially from those predicted. CANEX disclaims any responsibility to update these forward-looking statements;